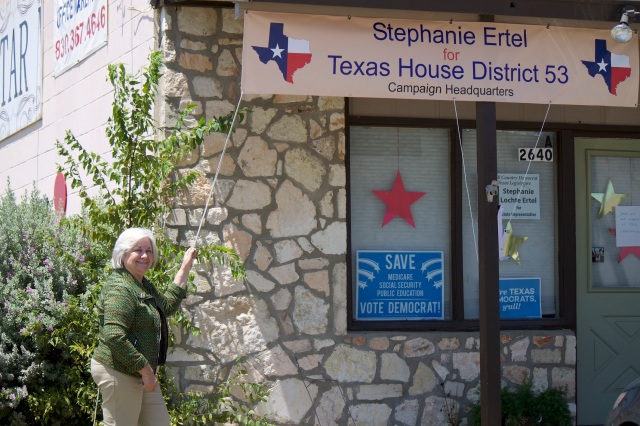 Everyone is invited to stop by our headquarters at 2640 Junction Highway starting at 5:30 pm to watch the elections unfold, eat tamales, hot dogs and all the trimmings, enjoy refreshments and talk.  We’ll keep track of all the numbers and provide our own expert commentary–Anna will bring her piñata!  We know there will be good news from the East Coast, some wonderful surprises from the heartland, and more good news from California.  We will probably close our doors by midnight.

This event is free–our thank you gift to everyone who has kept this campaign going in hopes of protecting our beautiful Hill Country. 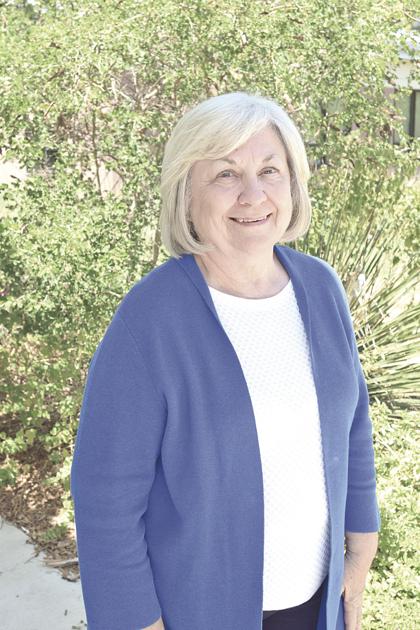 Bandera–Friday, September 7–Meeting voters by knocking on doors in Medina

May meeting of Hill Country TDW with Justice Patricia Alvarez

Medina River Cleanup–all day helping with registration and handing out supplies to the many people who come from near and far with their kayaks and pickups to gather up all the trash in and along the Medina River.  Headquarters are in Bandera City Park.

Mike Collier will headline a political forum organized by the Llano County Democratic Party and I will join Mike and other invited candidates to speak to the Democrats. Starts at 6 pm at Forno’s Restaurant.

Rick and I were invited to speak at the April meeting of the Bandera Democratic Party.  Always feel like a local candidate in Bandera with all the personal contact and generous support.

Brunch with Kim Olson, candidate for Commissioner of Agriculture.  Kim delighted the Medina County Democrats with her broad knowledge and terrific energy and humor. After brunch, we met to chat about campaign strategy and numbers with Medina County Chair Sandy Young.

April monthly meeting of the Kerr County Democrats with guest speaker, Justice Rebeca Martinez giving her excellent program on the history of the Texas Judiciary.  Now we understand why we elect judges, and why 2018 is the last year for straight ticket voting.  Gave a short speech about campaign plans and handed out my new bumper stickers!

Fantastic opportunity to speak to regular citizens about our new BIG issue: Local Control. Gravel Mining Town Hall, organized by Commissioner Tom Moser, provided a lot of information to over 100 citizens gathered there, including the disappointing fact that the County Judge and Commissioner’s Court have very little authority over land use, including obnoxious activities like gravel pits, rock crushing, cement mixing and asphalt. When my turn came, I could tell the crowd that Texas is the only state that does not give zoning authority to county government, and advocate for legislation that would provide land use regulatory authority to county government. The crowd applauded.

Relay for Life of Kerr County at theAg Barn starting at 6:00 p.m.

Lovely morning for a breakfast fundraiser with donors who are also friends.  We had perfect weather at the Riverside Nature Center for outdoor seating among the wildflowers, native trees and birds. 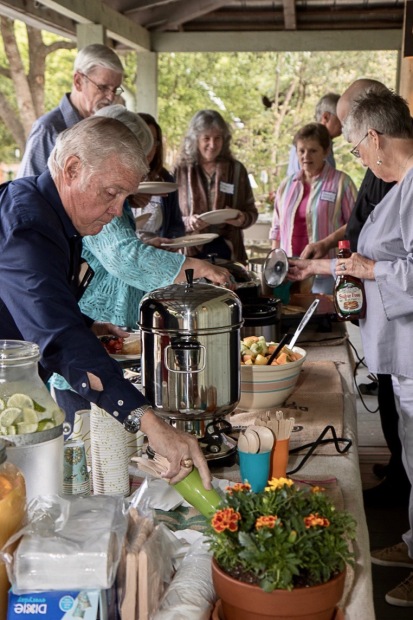 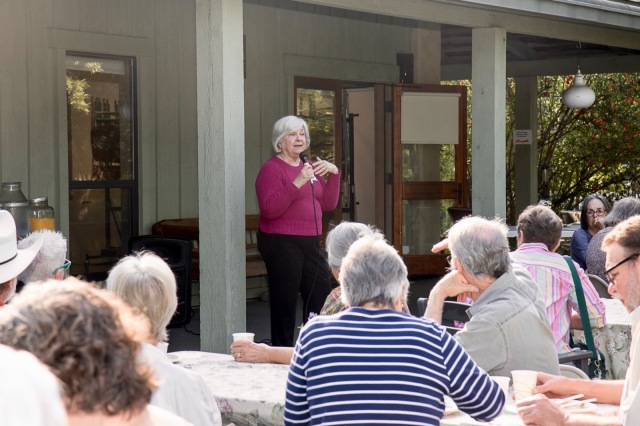 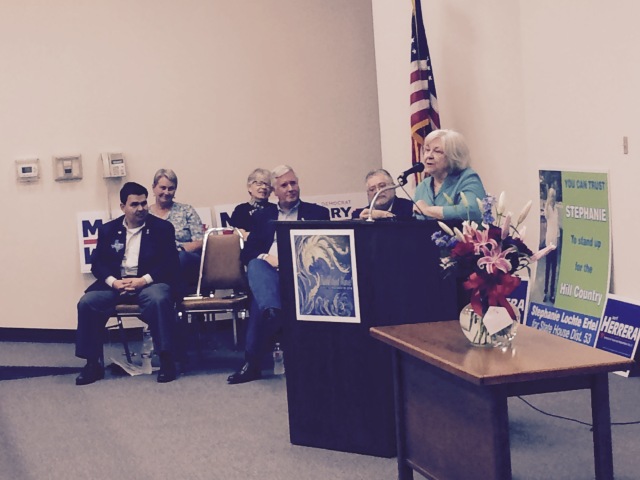 February 20–Stephanie spoke about choosing a candidate at the Kerr Democrats Campaign Rally.  Candidates for Congress, statewide offices, Court of Appeals, State Representative and County Chair were all featured in the lively event, moderated by Jerry Vaclav of Fredericksburg.  Note the “Build that Wave” poster on the podium.

February 15–Talk about the campaign memoir, “Running on Trust and Rainwater” at Kiwanis lunch meeting.

February 11-13–Lutheran Legislative Event in Austin; learning about issues and lobbying the offices of Legislators.

February 9-11, 2018–State Convention for Texas Democratic Women in Austin.  Friday evening entertainment, Saturday morning business meeting, Saturday noon Star Award given to Stephanie and leaders of other chapters.  Stephanie will also speak when all candidates are given a couple of minutes to  talk about their campaign.

February 6, 2018–Hill Country Chapter of Texas Democratic Women luncheon meeting, with “It’s Your Turn!” program to explore the challenges of being a Democrat when family and friends do not share your political opinions.  Stephanie will give a talk on the reasons to vote in the Democratic primary.

February 3, 2018–Democratic Party Rally in Marble Falls, sponsored by Burnet County and Llano County Democrats.  Large turnout for two counties of Democrats to hear candidates all up and down the ballot.

♦Bandera County Democratic Club January 13 Meeting at Bandera Electric Coop Building on Hwy 16 in Bandera to hear Jeffrey Payne, candidate for Governor in the Democratic Primary–lunch at 11 am.

♦Highland Lakes Chapter of TDW January 25 Luncheon in Marble Falls at 11:15 am.

♦League of Women Voters Candidate Fair at Bandera High School on January 27, 10-12 am.

Kerr County Democrats will meet on September 19 at 6:15 p.m. for an interview and book signing with Stephanie Lochte Ertel, author of a memoir of the 2016 campaign for State Representative.  Stephanie’s objective is to show that running for office can be fun and exciting, so that more Democrats will file and run in 2018.

“We Miss You, Ann” is a hit at the Kerr Democrats’ fundraiser.  Dressed in white as a visitor from “another dimension,” Stephanie performed her one-woman show based on Ann Richards’ famous 1988 speech to the Democratic National Convention. 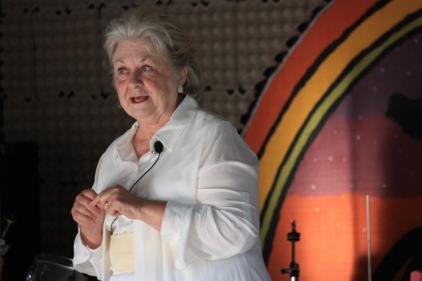 Stephanie Ertel plays the part of Ann Richards returning from another dimension to remind them that Democrats can win and to  encourage Democrats to run for office.

Stephanie is excited about reprising her role as Ann Richards in “Ann Richards: Backwards & in High Heels” as part of the Kerr County Democratic Party fundraiser at Roddy Tree Ranch on June 20.  The cash bar opens at 5:00 p.m., dinner is at 6:00 p.m. and the show begins at 7:00 p.m.  There will also be a silent auction to help raise the funds needed to keep the party office open during the next election cycle. Tickets are $40 each–send checks to PO Box 290614,, Kerrville TX 78029. 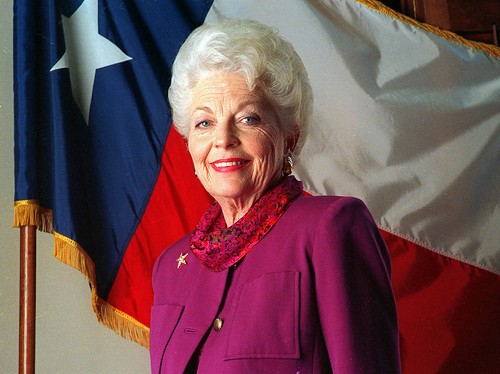 Medina River Clean-up on May 6

Stephanie joined the volunteers who gathered in Bandera City Park, helping with registration for the 17th Annual Medina River Clean-up, an all-day affair that draws people from Austin, Houston, San Antonio and the Hill Country to walk, paddle and drive equipment to remove two dumpsters (one filled with metal and the other with all other trash) of trash from 50 miles of the Medina River.  Thanks to all for breakfast, lunch, dinner and great fellowship with a dedicated crew.

Stephanie will be one of several candidates speaking at the April 8 meeting of the Bandera County Democrats at the Bandera Electric Co-op Building starting at 11:00 a.m. Tom Wakely, candidate for U.S. Congress, is expected to appear.

85th Legislature’s Agenda is the topic for the April 18 meeting of the Kerr County Democrats at 6:15 p.m. in the party Headquarters, 2640 Junction Highway.  Our new “election grief” action group, the Fire Ants, will meet at 6:00 p.m. on April 11 at Headquarters.

Relay for Life of Kerr County on April 21

Come to the Ag Barn at 6:00 p.m. on April 21 to join Stephanie and the Dems for a Cure Team in Wizard of Oz costumes as we invite children to “Paint the Yellow Brick Road to a Cure”.  Donate online at Relay for Life of Kerr County and purchase Luminaries to honor loved ones.

Let’s show the community how much the Dems for a Cure Team cares about cancer.

Stephanie Ertel, along with many Democratic Women (and a few men) from Kerr and surrounding counties, marched in Austin on January 21 with 50,000 or more Texans who participated in the Women’s March on Austin, a sister march to the Women’s March on Washington planned for the same day.   The March followed a 14 block path down Congress, west to Lamar and back to the Capitol on 11th street.  The purpose of the March was to express opposition to the discriminatory policies and attitudes pronounced by President-Elect Trump and show solidarity with all groups who are threatened by the Trump Administration proposals and attacks.

District 53 is larger in square miles than many states in our country.  Stephanie will be driving through the counties west of Kerr County from May 18 through 20 to learn about this district first hand.  Watch for a white Prius and wave–meeting people in the District and getting to know people who,share concerns about education, health care, rural economies and water resources is very important to Stephanie.